We’re currently working on a production ready version of a device we’ve been humorously calling the “Ghost BBQ” or “Demon BBQ”.  : )

The nickname fits, and gets an extra laugh for people who’ve been tortured by attaching spirits.  Or, at least the people who are consciously aware of the source of their troubles.  Most people have no idea what’s going on.  Which is part of why it unusually doesn’t get fixed and the suffering continues.

Which is also why the spirit world and the big picture is generally mysterious.  The greatest of mysteries.  The attacking spirits don’t want you to know much.  As the farmer with a cow or an agent with the Matrix.  Then you’d start looking for ways of defending yourself and getting rid of them.

So, back to the BBQ –  An official name hasn’t surfaced yet, so if you have some ideas, please send them in. 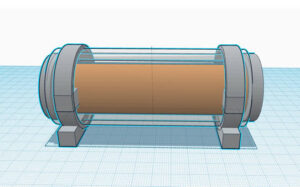 CAD file for the main body of the “Ghost BBQ”

The Ghost BBQ covers the body in a negatively charged static field from which negative ions also emit.  We’ve tested the prototype and it runs well.  It produces about a 1-2foot aura cleansing static field around the user.

So far it looks promising for lower and perhaps mid level attachments.  Its still in testing, and no promises can be made.   Unfortunately it hasn’t worked on the tentacle monster.

A couple of people had some old, hard to kill viruses cleared out.  Similar equipment has been used for decades, and found experimentally to help all kinds of physical problems.

That’s great, but we’re focused on paranormal solutions, which is often the root of most 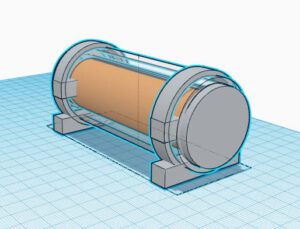 problems, and many the visitors here are aware of.  Remove the root causes and many problems evaporate.

The power level is close to a small or medium- sized Wimshurst machine.  These devices and their variations were famous in their use in healing and spirit removal.  A zap from a Wimshurst machine fixed my friends arm after it was hurt playing sports.

A couple of books were written in the early 20th century about people using them to zap entity attachments off of people.  It would be the dream of everyone, who are aware of the entities afflicting them, to zap them off.

So I sought a way to produce a similar kind of static field with an electronic device.

The books describe covering the person in a pleasant field of static energy to get the spirits to leave, or more of a shock to make the aura an unpleasant place for them to be.  The field method appears to work the best.

In the old books, they would have a medium communicate and help out process the spirit, once it released from the person.  Without that, doing the sessions outdoors near trees and other plant life,  would likely increase the chance of the spirit leaving to nature.  Otherwise, repeat the sessions until the spirits stays gone.

Negative Static or Negative Ion Fields have a dispersing or erasing effect on energy.  Like very high powered sage or sandalwood incense, but much stronger.

The field of energy that covers your body discourages spirit attachments from being there.  If they come back, you just re-use the machine.  If they are aggressive enough to keep coming back, they eventually realize they need to leave you alone.

Right now, I’m using one to run a negative ion emitter, for the room I’m in.  It spins a rotor, sending out a field of negative ions in the air.

Pricing is expected to be around $500 or so, depending on the final production cost.  This is about 1/3rd the price and double the power of a kind-of similar machine.  I wish I could give them away for free to everyone, but its not feasible.  They are not cheap or  easy to make.

Development has been slower than what I want.  The donations have helped, but haven’t been high enough to pay for much R&D.  Still we persist.

A financially strong company could develop a lot more solutions the world desperately needs.  Someone has to do something.  The problem isn’t going to solve itself.

A better way to get the word out and raise funds, perhaps by sales, needs to be found.

Either way, if you’d like to be notified when they are ready, let me know with the contact form.